How to Develop Your Story In 10 Easy Steps (Part One)

How to Develop Your Story In 10 Easy Steps (Part One) 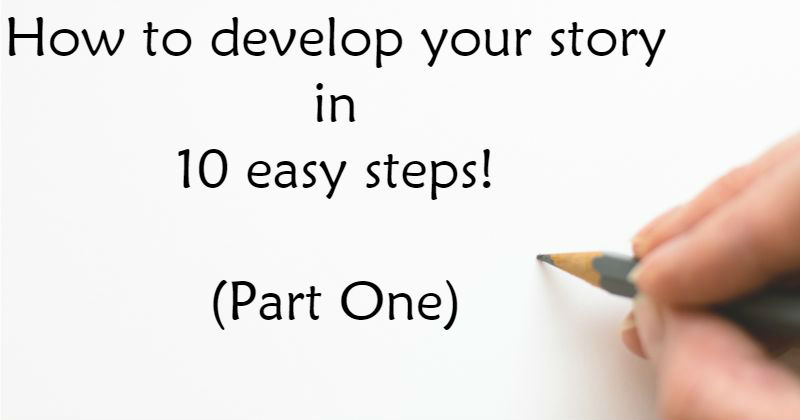 Writer’s mind is an amazing thing. Even when you’re not consciously thinking about your next story, it brews somewhere deep inside. Then it bubbles to the surface and you go, “Hey, that’s a great idea, I’m gonna make a visual novel!”

No you won’t, here’s why

Next comes the sweet messy daydreaming every author enjoys. You think and think. Great ideas blossom in your creative mind. Daydream about your story being made. You do some research and maybe even some brainstorming. Talk about your idea to your friends and they go “Wow, can’t wait to read it!”

Sometimes you drop the idea and your “next great novel” evaporates. But often you start writing. Hey, you’re an author and you know that next big sweet mess is coming up. You just write and write with no plan or goal other to make that great story come to life. Ideas come along as you write and you just pour it all. Story either wrestles away from your grasp or you drown it in words.

Wild story on the loose whacks you with one of the dead ends and you slowly lose interest in taking over the control. Or you just keep steamrolling over the story and then declare it finished but don’t really understand what went wrong when instead of glorious novel you have limpy washed out writing…

What I’ve just described is called a creative process. We all have one, even if we are not always aware of it and it’s elements. It can be more organized or less organized. It can be improved and made more efficient.

Reasons why YOU don’t do it is a) coz you’re lazy, b) coz you believe that creative process SHOULD be messy and that every attempt to organize will kill the creativity.

Well, good luck with your opinion. For the lazy ones I have super easy method to follow. And for those who think that planning is enemy of creativity I just have a big laugh from the bottom of my belly.

Yea, right. Ask any of the pro writers like George R.R. Martin or Stephen King how they keep churning out books. And if you think that high literature authors like Haruki Murakami or Kurt Vonnegut didn’t have strict routine and defined creative process, then just – google it!

The gist of this method is to take a simple steps and repeat them on larger and larger scale till you get a full-blown novel starting from a single simple sentence.

Yea, it’s just like a snowflake which looks amazing and is, in fact, built from very simple geometrical shapes. Starting from single triangle, by combining it and iterating, you can get amazing and complex shapes.

In fact, this method is so easy and powerful that it can be used as a tool to plan out your story, as well as the way to write it. But I’ll explain the snowflake planning method first.

Why are we doing this, again?

Ah yes, the importance of planning. Once you start writing, your creative mind is busy. It has no time to check facts, think of plot holes or factual errors. You gotta keep focus on the noble art of turning your thoughts into written words and you can’t effectively think as you write. The best writers follow the 10% inspiration 90% perspiration rule.

They sweat over preparation, organizing their thoughts and placing effort in finding ways to convey their ideas so that once the writing starts, their mind can be relaxed and focused on the craft of writing, picking the best words and sentences.

We can compare the whole process with cooking. Even for a simple meal it’s better to plan it. That way you can go to the grocery store, get all the ingredients and spice. Imagine if you cook immediately.

While getting ready, cleaning and chopping the veggies, your oil might burn and have your food ruined. Better is to prepare everything in advance. The best chefs have their ingredients measured and stored in practical containers before starting to cook.

Sure you can improvise, add ingredients as you go along, but then you rely on luck and your superb skills and talents. Not sure I’m on that level, but if you are, go ahead. There IS a certain level of fun making things as you go along. It’s simply the fact that you can’t rely on the outcome, nor you can repeat it (indefinitely).

Write a one-sentence summary of your game. Yup, it’s not easy, so take the time, one hour. This is not only the very core of your story, it’s your ‘hook’. Something that will immediately grab attention of a reader.

Try not to use more than 15 words. Keep it short and sweet. No personal names. Better to say ‘our hero’ than ‘Mike Johnson’. Try to tie together the big picture and the personal picture. Express why would a reader care for the story. You can research blurbs for the bestsellers if you need to see how this works.

Also here are some examples from the media, games, literature and movies.

Step two is going to be expanding this one sentence into five. Again, take time, full hour. The goal is to tell your story in five sentences, working from that starting point. You will use first sentence to set up the story. Last sentence will be a conclusion. Three sentences in the middle will basically take us through the journey of your hero.

Let’s put Star Wars IV: New Hope into five sentences. Not as easy as it seems!

After Empire seizes her and her ship, Princess sends Robots to escape and they get young Farmer to return them to a powerful Hermit.

Learning about his legacy as Jedi, Farmer leaves with Hermit, teams up with Scoundrels only to find their destination planet blown to pieces by powerful Death Star which captures them.

Farmer and Scoundrels discover that Princess is held on Death Star, then rescue her along with blueprints for the mega-weapon, aided by Hermit’s sacrifice.

Farmer joins the Rebellion in their assault on the Death Stars but final battle doesn’t go well for the Rebels.

Scoundrels return and enable Farmer to use his Jedi-talent to destroy Death Star, earning them medals from the Rebel Princess.

Whew. Ok that was EASY compared to your task, because I had to deconstruct the story already made. Your goal is to write one so that the plot is crystal clear from these five sentences. Basically you will have to invent three turning points, peaks of drama, overcoming of crisis or obstacles.

Think carefully, name of heroes often carry a hidden meaning that reveals something about them. No one wants to read a story about John Doe, but Luke Skywalker or Aragorn son of Arathorn or Lemony Snicket, do carry names full of meaning and intrigue.

You don’t need to recap the whole story here, just a journey of your main character. Using our Star Wars example, this could be one-liner for Luke: A farm boy meets a Jedi-master who initiates him in the ways of the Force, he rescues a princess, then uses his newly found talent to destroy mega-weapon of the Evil Empire.

In one sentence for each question define character’s:

WHAT do they want (goal) – To battle Evil Empire

WHY do they want it (motivation) – It is his destiny

WHO or what is trying to prevent them (conflict) – Darth Vader

HOW do they change, what do they learn (epiphany) – Learn the ways of the Force

One-paragraph about your character’s storyline

Ok now, time to expand that one-sentence summary of your character’s storyline and expand it into a paragraph. No more than ten sentences. Focus only on what happens to the main character.

Luke discovers two robots and returns them to Obi-Wan Kenobi who reveals that Luke is heir to old mystic tradition.

After he learns that his family was slaughtered by the Empire, Luke joins Kenobi in his search for Princess Leia. They get captured by Empire’s Death Star and learn that Princess is a prisoner there.

Luke mounts a rescue mission and thanks to Kenobi’s sacrifice they escape with Princess and secret blueprints for Death Star. Luke joins the Rebellion and participates in the final battle.

Using his Force talent he destroys the Death Star.

Whew. Again, not easy, but possible. Notice how I tried to stick to Luke’s storyline, not going into details what’s going on overall. Didn’t even mention Han and Chewie!

End of part one

Ok that was enough for today. Try this out and let me know if it works for you. Two more things before we part, though.

Revise as you go along

The beauty of this method is that you can revise, change, adjust, edit and switch anything. You have nothing written yet. Imagine if you had to make changes in the 120.000 words script. Shivers. Yea, better change the story now. If writing one character inspires you to modify the story or revise other characters, that’s awesome. Stay flexible.

It doesn’t have to be perfect

This is the planning stage, remember. You are still being creative, just without the pressure of having to nail everything down right. Make an outline, see how you like it, return to it. Invent more, create outlines, then revise, change. Things you can’t figure out now, leave for the moment. You can always come back later and fix it. Let the story brew some more and come back to outlining when you have better understanding.