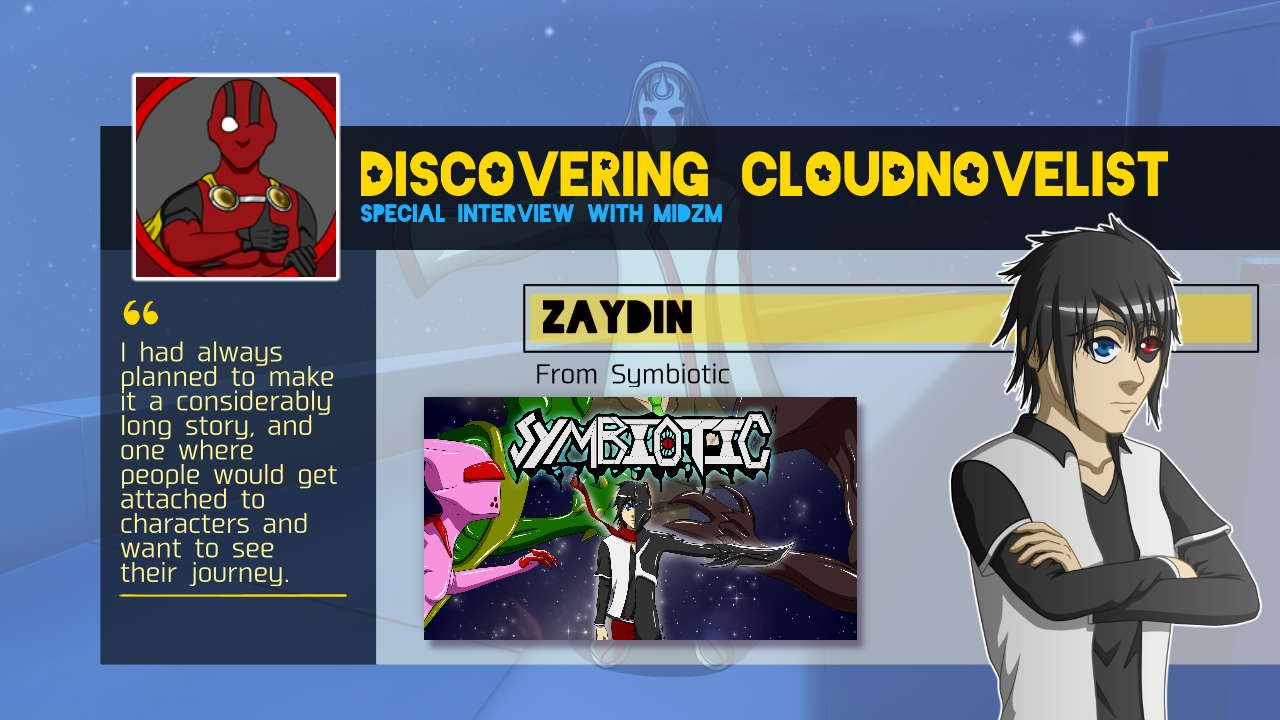 This month’s interview is with MidZM, the author of Symbiotic. In the following interview, Mid shares his development process and recounts his ups and downs of making Symbiotic, an rpg-esque saga.

Mid is a wizard programmer for our CloudNovel engine, as well as a game developer skilled in animation, art, and design! Like most CloudNovelists, much of his identity remain in mid-stery (👈🌝👈), but he is super friendly and often seen helping users on the CloudNovel discord server. His game, Symbiotic, also reflects his meticulous and warm personality 😀

Hey Mid! Thank you for your time for this interview. Before we begin, can you tell us a little about yourself? 😀

Sure, I go by the username “MidZM” or “Mid[272, 252, 262]” (I have had the mid name for a long time…) just about everywhere on the internet.  I barely ever go by my real name because I’m not a huge fan of people knowing who I am. I’ve been doing art for years, and coding for… well I really don’t know how long?

LOL, no. I was just listing the other numbers that I’ve gone by in the past, Mid272, Mid252, Mid262, and for a while I went by the name Zoeo, but people kept confusing me for a girl so when my art started getting better I changed it to MidZM (to get rid of the numbers).

Ahh, Pseudonyms do be like that :’D. For a while people thought I was a guy called Tome. . . That also means you’ve been online for art dev accounts for a while too, before joining CN?

Yep, I used to be on DeviantART (You could probably still see some old art and my webcomic on there), I even changed it to MidZM before just… not uploading there anymore. I also used to go to Tapas and LineWebtoon, though I left there for… various reasons.

Wow! How did you come across CloudNovel?

Originally I had planned to make my Visual Novel (Symbiotic) a premium webcomic on Tapas, but that plan didn’t pan out and I lost out to other creators (No hate on them, just sad I wasn’t able to make my story).  So after a while I had gotten a bit burned out on my Webcomic from the hours of work I dedicated to it and looked for a way to turn Symbiotic into a video game, and I eventually settled on making is a Visual Novel, since I could add game elements to it and make it something people would really enjoy reading and playing.

At the same time I did NOT want to learn another coding language… it’s annoying and I didn’t even have a proof of concept at the time to build off of.  In my search for VN engines I was unable to find anything that met my criteria (CloudNovel never showed up in any of the searches I looked through), but someone actually suggested CN, so I looked into it and loved that I could make my story an actual game without needing to learn a coding language to do it.

Ohh, I see. So you’ve already been thinking of Symbiotic, and chose visual novels as the medium to tell the story. How long have you had the idea in mind?

The idea for it was NOT as sophisticated as it is now, but I had always planned to make it a considerably long story, and one where people would get attached to the characters and want to see their journey.

That’s really impressive. How’s the development of it going so far?

Good, I’m working on chapter 2 right now, although it’s been in development for about a year and a half because of how long it takes to make the massive amount of CG’s (I think chapter 1 had about a hundred or so, and chapter 2 is on track to double it……….), animated ending, secret endings, various other discoverable secrets, etc.

I’d love to have it finished before the end of the year, but MAN it’s a long process :laughing:

Do you do it all solo, or do you have a team?

It’s all solo at the moment. It’s a lot of work, and all I can hope for is that people really enjoy it.  I will be starting an IndieGogo campaign for it after I finish chapter 2, but that’s a little ways off. My previous KickStarter campaign didn’t do too well.

Well, good luck!! It sounds like you’ve done quite a lot of work so far.

Many of us have yet to have experiences like that. Can you share some anecdotes or things you learned while making the visual novel?

I learned that I’m not great at trailers (More so on the side of dragging attention to the game portion of the VN) and that when I redo it I need to hire voice actors, create more animations, and generally try to make it grab people’s attention to want to play the game.

An engine that is made completely non-coding based, has a few limitations.  Though in making chapter 2 I have been able to overcome most of those limitations through new features added and the various bug fixes that have been made.

I am super detail oriented!  I put so much detail into my game that it takes a long time to finish.

Hahahaha. I can relate. What’s your VN, Symbiotic, about?

Hahah, well, Symbiotic is about a kid (Zaydin) who has to fight a war with an entire planet of symbiote type monsters that can take control of a host, turn them into hulking monsters, and force them to do horrible things.  Zaydin and his school of Symbiote Warriors all use man-made symbiotes to kill the monsters before they can do anymore damage or turn others into them.  Since the process of becoming a Symbiote cannot be reversed, death is the only release for the victim inside who must witness everything the symbiote monster does. The problem with the Symbiote Warriors is that the man-made symbiotes can only bond to humans under the age of 18, attempting to bond to someone 18+ will cause the symbiote to take control of them and go on a rampage.  So the only people who can defend the planet from being consumed or destroyed, are children.

Throughout the story Zaydin is joined by various characters (and a love interest) who “help” him defeat the monsters and protect the planet, I say “help” because Zaydin doesn’t want anyone to help him and it’s only after he hijacked an auto aircraft and went on a spree outside the school that he was forced to go on missions and hang around with a team consisting of Elliosa and Kadin. Elliosa is a young (14-15 can’t remember off the top of my head) girl who has a HUGE crush of Zaydin and is always hanging around with him, even though he hates it and wishes she’d leave him alone.  Kadin is a fairly large guy (17 years old) who hates Zaydin for various reasons, Kadin is super protective of Elliosa even though he’s only known her for a few months.

It looks like time is almost up haha, and I don’t want to keep you for long. But I’m quite curious about your experience in using and helping develop the engine. What do you look forward to in the future: visual novel wise, and game engine wise?

I do help develop the engine, fixing bugs, adding features, and generally trying to make it bigger and better for current and future users to make huge feature packed Visual Novels.  In my experience I’ve really enjoyed using the engine and working on it, it’s easy to use and understand.

No problem! Your explanations are very very helpful ahaha

Thank you very much for the opportunity to interview you. I learned a lot, and I’m really excited for what’s to come :DD

Thanks for the interview ^.^.  It was really enjoyable to be able to talk about my game.