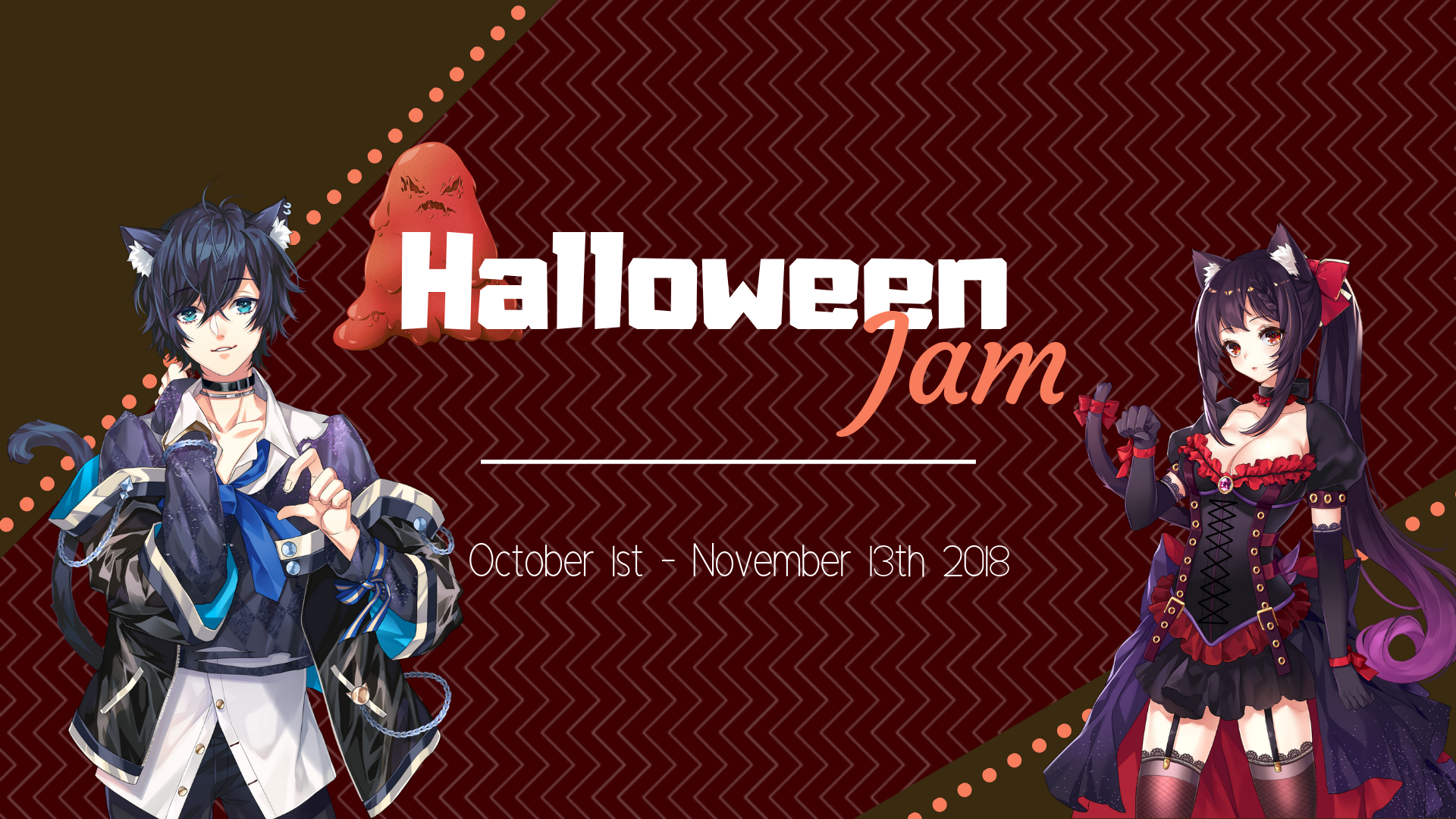 Halloween Jam has ended a long time ago and we are sorry for the late review of the entries. We encountered some technical problems while reviewing such as bug, bug and bug? Aiya?!

…….ANYWAY! Putting all the bugs aside, we have finally finished our assessment and we are very much excited to share the result with our dear CloudNovelists! YAY!

So, without further ado, we presented to you; 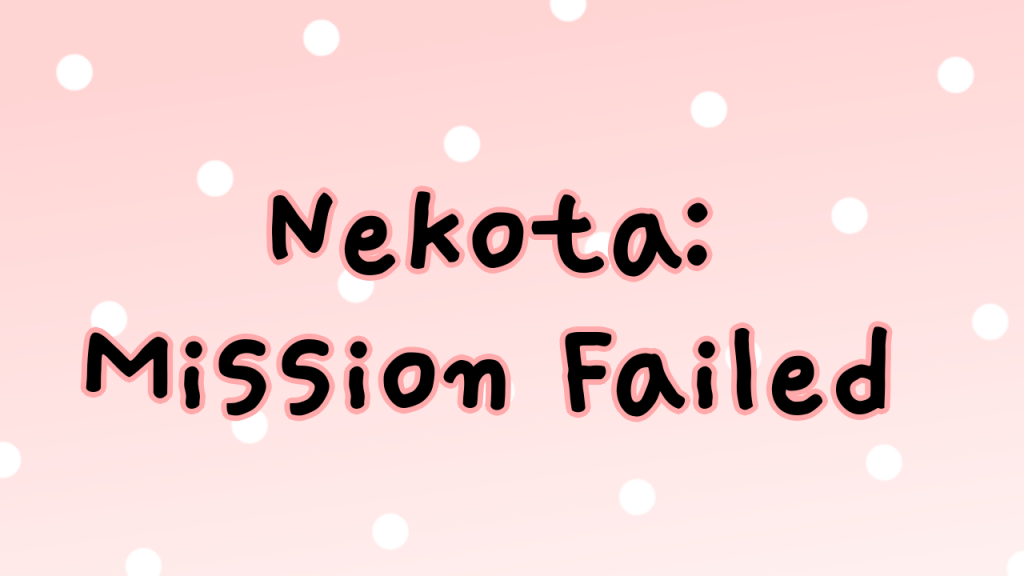 Nekota: Mission Failed definitely has an interesting concept, we’ll admit. When we read the description, we might be a little over-hyped for such a short and unfinished VN. The art is original and VERY cute and stylistic, but the storyline was a bit everywhere and very confusing. It started out with some girl murdering someone? Then there were aliens trying to go sign a peace treaty with the US? I’m not entirely sure what Azumi meant for this VN to be. There is also no GUI, backgrounds, music, and is probably 15-20 pages long. Thus, we will reward Nekota: Mission Impossible an amount of 555 points. Please keep the hard work!

It was a really short game, but it looked nice. There wasn’t much of an explanation before encountering the “monster”, but it could be guessed from the title and from the description… kinda lol (was expecting something like battles or chases haha). The animation at the beginning of the game is cool, but for the rest, it was quite a simple game. There’s no music and the background is minimalistic, but the art and GUI are good. The points awarded for this entry is 600 points.

Our first impression on the Main menu was “Whoa, nice!”, however, our ears couldn’t take the music longer than 10 seconds. Putting that aside, we will move on to the real review. So in Softvoice Shadows, I guess the MC gets somewhat taken? We cannot be so sure because the introduction wasn’t that very clear and overall it was a bit boring to play.

You can talk, fight, and look around however the plot lacks a lot.

You have to try to stay alive as best as you can since you are in great danger or so it seems and the only one who you can probably trust is the first person you meet in the game. You have to look out for important items and watch where you are elements in the VN that count (kinda) however the usage of animations were nice. We gave this game 800 points so please keep working hard making fun VN!

This VN has a pretty typical start – You woke up in a strange room while having no idea what was happening then you found other people in the same situation who you happened to know a bit.

The introducing was good, and there was a bit of explanation about who is who. Later on, the game gives us the chills as the music and laugh-sound effects were nicely used.

We got a bit interested in the story and sure do wonder what actually goes on or what will happen. Even so, it still lacks in term of GUI and creativity so we agreed to give this entry 1000 points. Thank you for joining the jam, Yourpersonalprince. 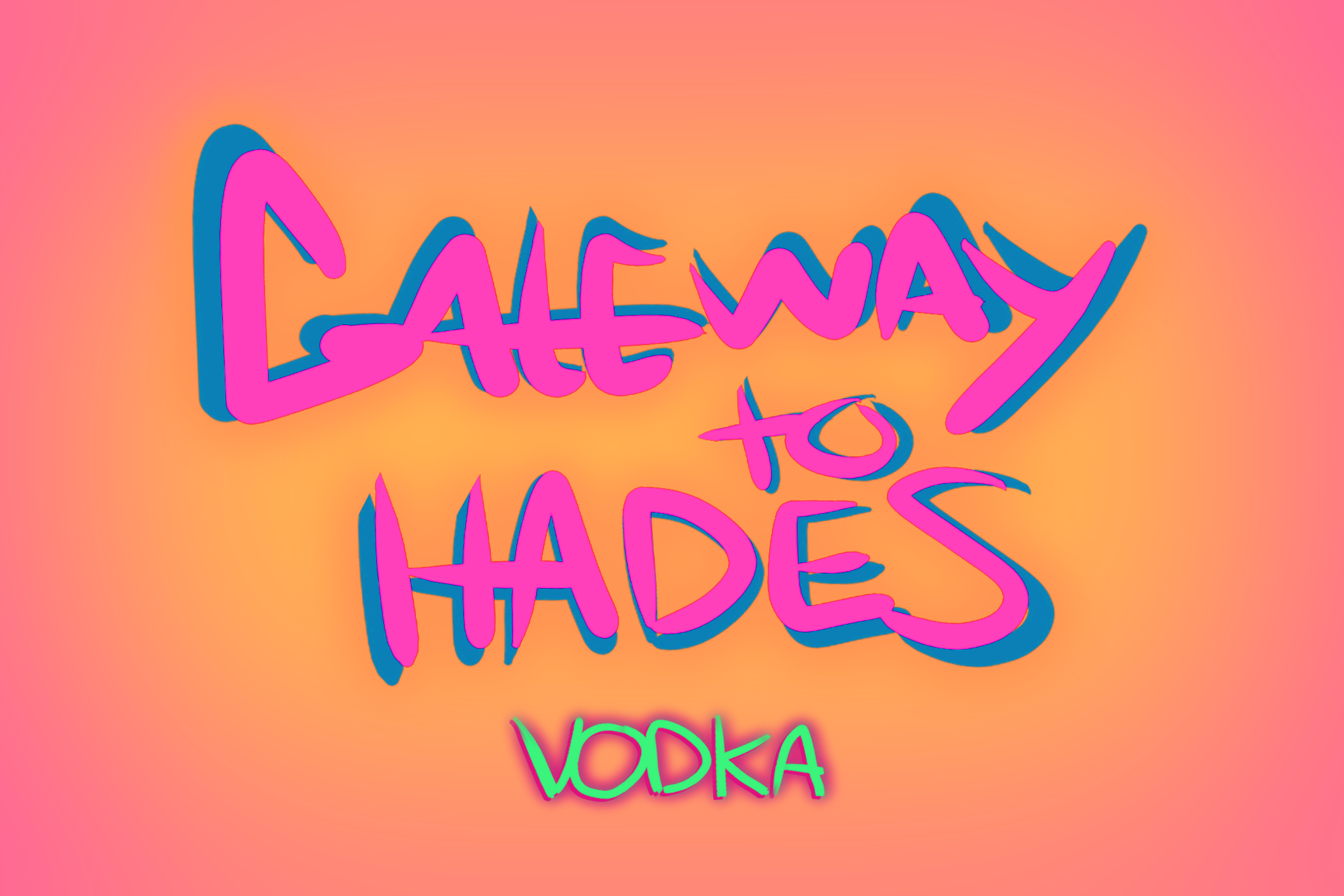 The novel is pretty well-made but very long for a demo. The art is very cute and original, but not the greatest. It has BGs and a custom textbox and a custom arrow, which is a nice addition. The story is creative, essentially about a portal to Hell opening up. The writing is very clean and humorous, but there is no indication when they changed the speaker so it is very confusing to know who is talking currently. It would be great if they changed the color of speaker name or just change the sprite to let us know that someone else was talking. It was also long and lacked any action, which forced me to skim through the entire thing without becoming insanely bored. This entry has a very creative and good idea, unfortunately, bad execution. It didn’t have a menu, SFX, or music, so we have to sit in silence while playing this. Vodka clearly worked hard on the art and storyline, however, so credits to that and we will give 1000 points for that effort. We are anticipating more works from you! 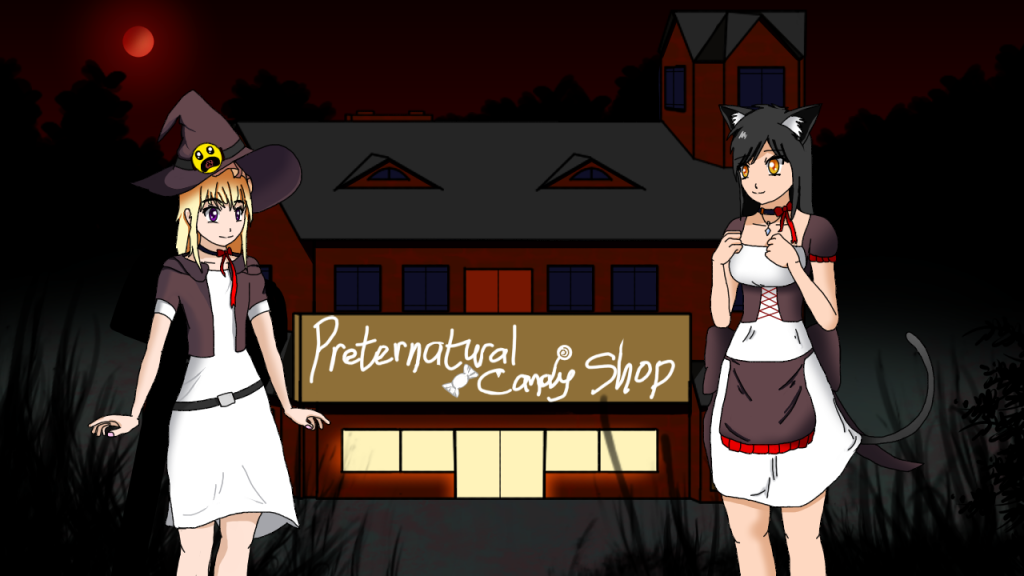 It’s a polished game. The story is funny and quite long. It was a very nice work considering it was made in one month, with all original art and CGs. It has many endings depending on choice, although the base idea/plot of the game is quite simple. The narration style isn’t particularly engaging and not very smooth to read but the GUI is pleasant to see and it fits the game. For this, we are pleased to award this VN a total of 2500 points. I wonder what will you have for us, next? 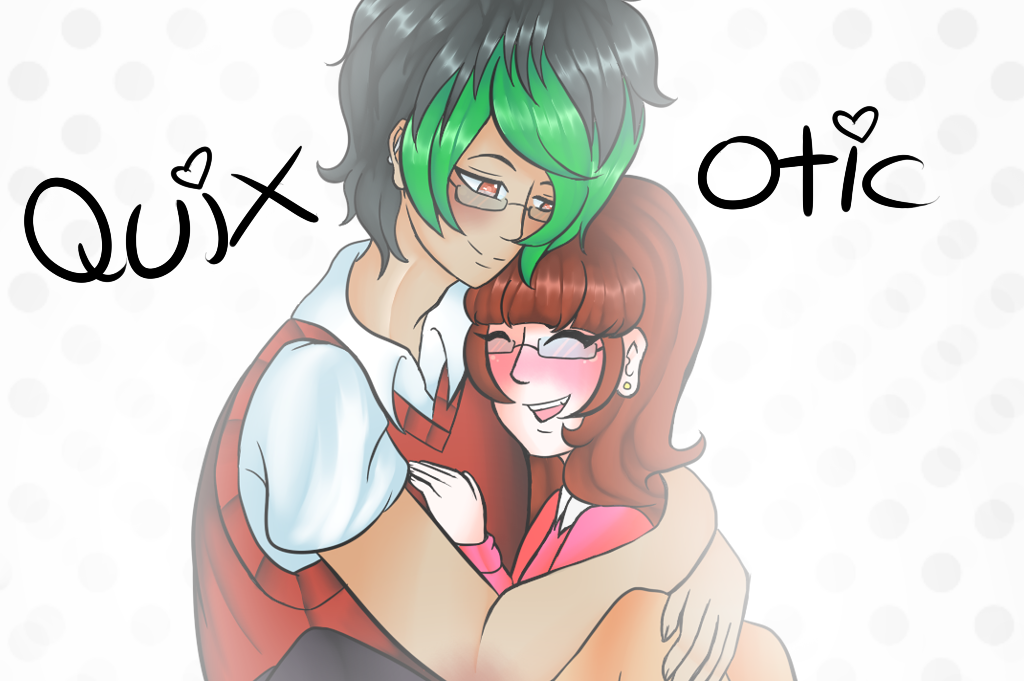 At first, this VN looks like a cute romance VN. An emotionless protagonist who is inexplicably infatuated with a girl he meets for the first time. How sweet would that be (if not for that knife arrow in the corner?) The protagonist can’t stop thinking of his crush. Just imagine how innocent was that (was it not for the sanity bar that keeps dropping or that knife arrow that keeps poking me in the corner) They’re so spooky *internal scream* YET SO INTERESTING! The perfect use of small elements such as sound effects and a bar that’s basically useless (since you can’t do anything to fill it, but it-throws-anxiety-all-over-you, so-deal-with-it) making the game very engaging. The plotline, however, is quite straight, you don’t get to choose much, but it also adds pressure on the player who might be trying to change the outcome somehow (but no, you fool! There’s no choice for you to make! You can’t stop this yandere from going wild!!). Overall it was a very good VN to play, but it was short (although finished) and the base concept was also quite simple. In other words, we love this work! Here, take this 3000 points for giving us a fun (and spooky) VN to play!

A fangame with OCs of various artists. The first impression was very good. It’s very interactive as it features various routes with various characters, and it contains interesting minigames. Many flags and buttons were used, leading to different outcomes. The character designs are cool, and each of them has a clear personality. However. the plot/base idea was very simple and it was a fangame, so we’re not giving a high score for “concept”. For the background, it doesn’t fit the character art the best, but it doesn’t clash too much so we will give this VN, 4000 points as a reward. 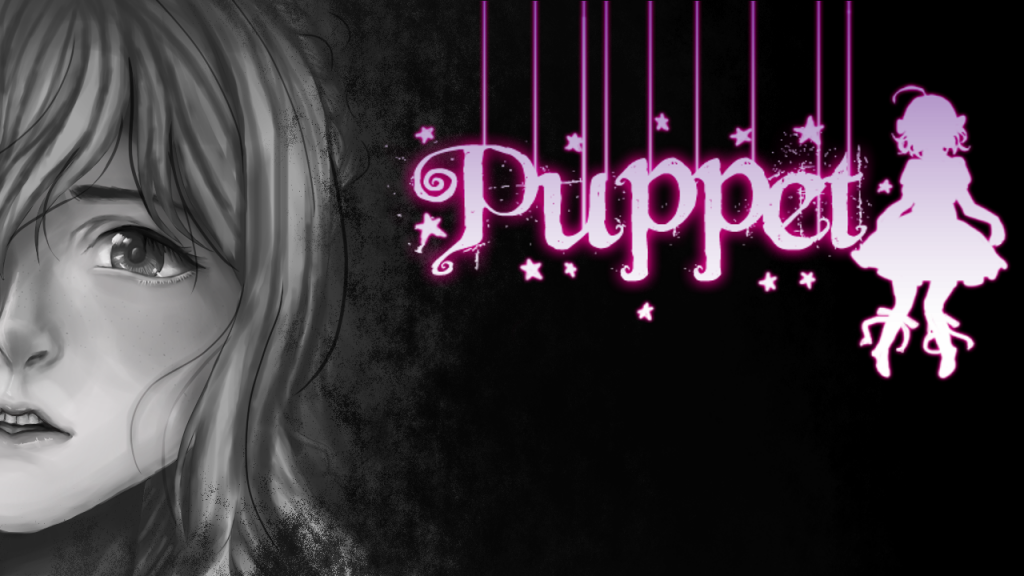 Though it is only a short demo as of now, Puppet seriously gave me the chills. Puppet is a really nice VN and the beginning was very well written. With beautiful yet unsettling illustrations, as well as an overall black and white concept, Haryu’s Puppet revolves around a young girl Lilith and her adventures in a mansion to find her missing identity. Art and UI are original and very well done. Characters are unique and personality defined. Mr Boo is especially adorable. Great job and I can’t wait to see what happens to her in the future! Therefore, we will give this entry 4500 points. 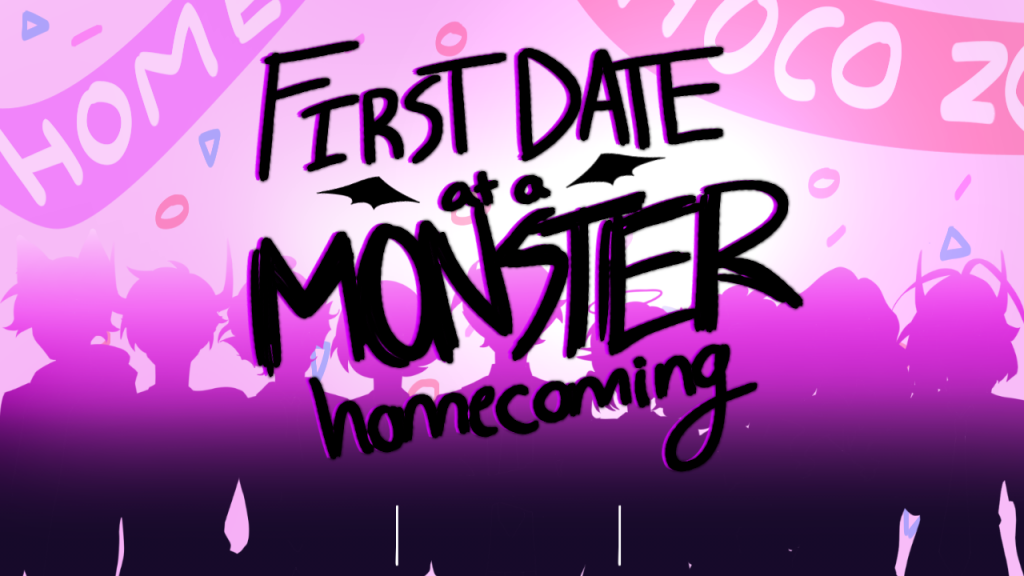 The characters are really well made both art-wise and personality-wise. Their designs are captivating, their personalities are well built. They feel like actual people, not flat tropes or NPC who revolve around you. They interact with each other, they have a past and have future plans, they have aims. The main event of the game is the homecoming, even though that part hasn’t been added yet. But it was fun to join these guys as a new friend, and not as a transfer student with protagonist aura who comes to pick a date.

The backgrounds are edited photos with some paint over, but they don’t feel out of place. The GUI is nice although the option icons are a very hard to see. Overall it’s a great game so we will give this 5500 points. Looking forward to the next part!

So You Want to Be a Vampire 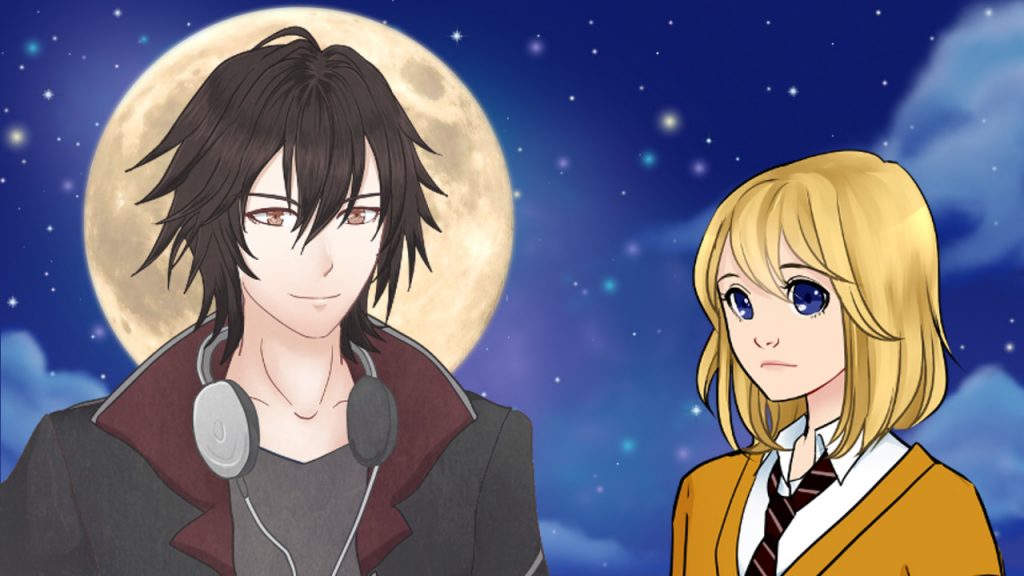 Lenore’s So You Want to Be a Vampire is not your typical vampire-human romance story. At first, we had some doubt about this Visual Novel. After all, vampire-human romance is an overused trope. However, we were quickly absorbed into the storyline in lenore’s So You Want to Be a Vampire because of its writing and complex storyline. While the novel is based on a supernatural theme, its writing is surprisingly realistic and characters relatable. Rather than a stereotypical wallflower, the main character’s identity as a “crony” of the school mean girl is also refreshing for a change. The art is a 6/10 because it is not original, but the overall development is extremely well done. It’s also one of the few finished Visual Novels, too! We felt very delighted to award this great work a total of 8000 points and thank you for participating.

With this, we are done with the visual novel entries for the Halloween Jam. HOWEVER! Fear not, my fellow CloudNovelist! We have a special entry! One and only one entry! A dress up game entry!

We presented to you, 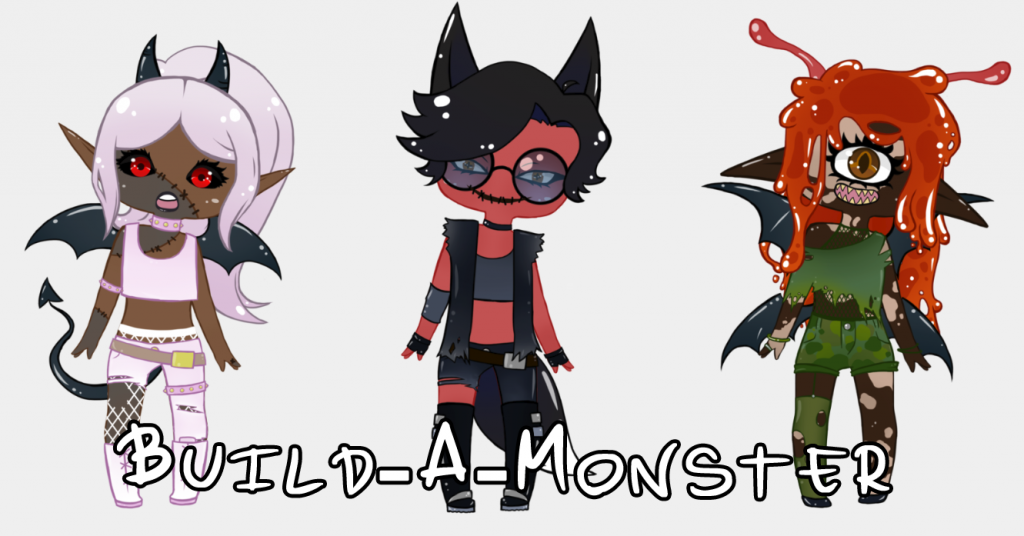 The only dress up entry for Halloween jam and it’s a really cute dress up game! It features a large number of customization and pieces. The art is clean, the design is nice. The GUI is simple and easy to understand. The rest button is very useful too! We are very happy to give this entry a total amount of 7500 points! The game is very cute, cute and cute!

Now, now… We are not done yet! We have a special judge entry for this Halloween Jam. The game is called:

Dark Lords Don’t Give A 🙂 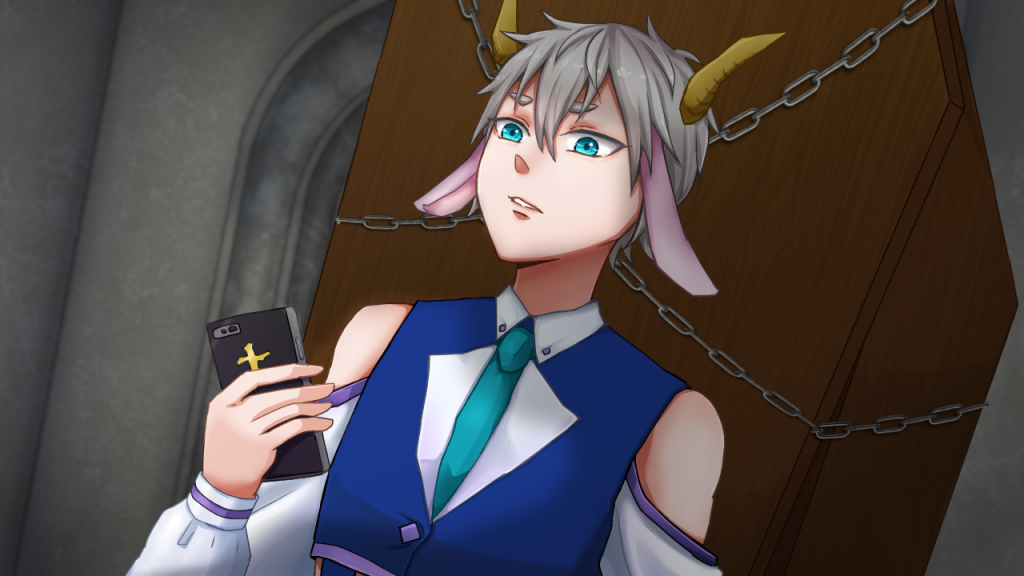 This game is a work collaborated by several moderators and users. We will not give this game a review because we want you to have fun or stressed playing this and please leave us your impression of the game. WARNING: This game shall not be taken seriously!

Now that everything is mentioned, it is time to put a stop to this post. Please, have a good day and thank you for staying with CloudNovel. More and more updates and features are coming soon so please stay soon. See you next time~