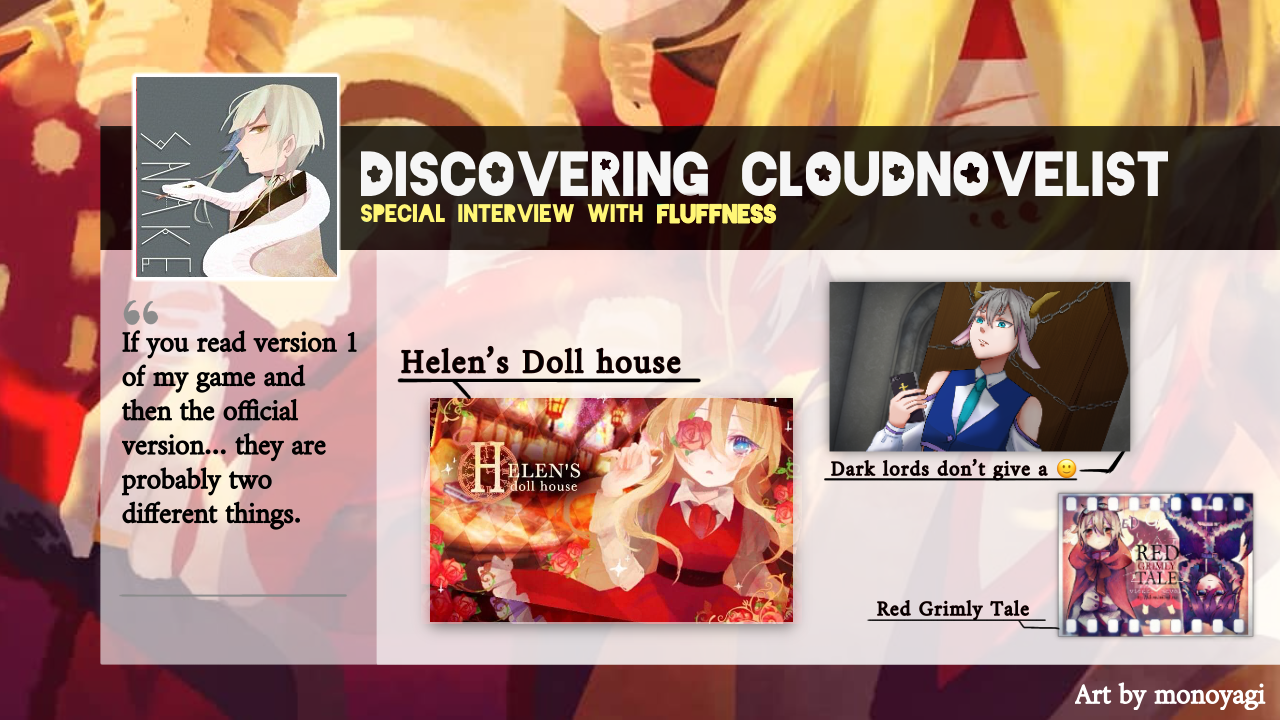 Hey CloudNovelists. This month, our guest for the interview is Fluffness!

Fluff and I (Otometaku) have known each other for about 4 years, since one of the first game jams in CloudNovel. Even if you’re new to CloudNovel, you’ve probably seen her games around, including The Red Grimly Tale series, Helen’s Doll House, Dark Lords Doesn’t 🙂, Fluffland, and more! The visual novels are quite creative and popular (with 100k+ views), ranging from storytelling gatcha, fairytale spin-offs, as well as baskets and baskets of fluff.

In this interview, Fluffness and I discussed tips for all of the aspiring CloudNovelists to develop successful, finished VNs and how to work with a team. Fluff was down-to-earth and right to the point, offering pragmatic advice with bits of memes and humor!

Before we start, can you tell us a little bit about yourself?

Wait. Are you expecting a serious answer?

Ok alright. I’m fluffness. I’ve been working on visual novels for 4 years or so. Currently, I’m working on fluffland in a fixed team with monoyagi, the best artist in the world. I’ve also collaborated with others, especially the wrecking crew (dark lords doesn’t give a 🙂), because the meme power is too strong. I created 5 finished games with my collaborators and various dropped projects because collaborators keep disappearing :’00

So Fluff, you’re basically one of the OGs of CN. Because of that, I’ve got to ask you this question~ How did you discover CN in the first place?

I don’t know. Goat (monoyagi) dragged me in. Goat wanted to make a visual novel about our OCs (Red and Wolf), and tried to find something online. Then, the goat found a tutorial on how to make visual novels with cloudnovel and tried to use it, but the goat couldn’t understand how it worked and asked me for help. That’s how the collaboration started.

The Red Grimly Tale! Ahh, the memories! You and Goat also published a lot of your work for offline games too: I remember I saw the game on itch.io one day.

Yep. there are our games and some of goat’s comics and short novels. We used CloudNovel’s option to download VNs for that. Also with itch.io you can accept payment/donations, so why not lol.

There’ve been so many more features in CN since it’s first released. In your perspective, how has CN grown and changed over the years, compared to when it first started?

Aah, so back then I started using CN when Sonya (creator of CloudNovel) was not around. It was still a small engine back then with a few simple things. There weren’t all the features there are now. Sometimes, I was so stuck because there were many things that didn’t work, but I still somehow managed to finish the game. Now, the community has grown and there are more features. You can make more advanced games. But the lag is still there, oh gosh probably because my games are abusing the engine, but bugs and lag have been stalking me for 4 years.

The summer jam is coming up soon, and we’re expecting teams to collaborate then as well. Since you’ve worked with mono on numerous finished games and organized collaboration attempts, can you walk through a typical day collaborating for a VN?

If I can give a suggestion… free collaborations may not be effective most of the time. If you’re thinking of doing a pro-looking game by working with others, I’d consider a kickstarter or paying your collaborators even a little bit, just to make sure they actually put effort on it.

I’ve worked with more than 10 people, and the only projects we managed to finish was with Goat and projects with the wrecking crew, but they were very short projects that could be done in a month. Also, if you’re starting a project with free collaborators, I’d STRONGLY advise not to make it too long and be ready to do most of the work yourself.

Wow. Solid advice. What if you’re someone who might not have a lot of funds? For example, a student or casual trying to start out in a game jam?

If you don’t have the funds, that’s what kickstarter and crowdfunding is for. Of course, that also requires a lot of effort, not to mention that once the kickstarter is successful, you MUST finish it, no matter how hard it is. Oftentimes, it’s not easy to finish a work even if you have a good team for it, because you might not feel inspired or you don’t have time for it.

As for game jams, they are SUPPOSED to be short games, so there’s a chance to manage it if you can find a good team. What I would suggest is to know what you can do and what your team is willing to do. you can start dreaming about a professional game that lasts 10 hours, but you also understand that it’s very hard for free collaborators to stay with you for so long. Personally, I think a short game is much better than a game that’s not finished.

Hm, say you’re working in a team of two. Like you and goat (monoyagi), how would that work in terms of dividing work and communication?

How do I explain it… You know how in school projects, there’s always that one person who does 99% of the work? Well, we both happened to be that kind of person and happened to meet lol.

So somehow we didn’t quit the project until the end. There were actually other collaborators for Red Grimly Tale at the beginning, but they quit midway. Dividing work is pretty easy for us. Goat is the best artist on earth, so of course all the art and graphic parts belong to Goat. I do everything else.

How long does a typical project take for you guys to collaborate on?

Months, at least. Sometimes years lol. Of course, it’s different for game jams. There’s a very short time and the project is also very short. The shortest project I made was with the wrecking crew, which was finished in 2 weeks. The longest is Fluffland, and i’ve been working on it for almost 2 years already.

Do you have any tips on communicating with your team members, as well as working solo?

Oh, I use facebook and discord with my collaborators. but they still run away, so not the best way, I guess. Gotta go to their house and stare at them from outside their window, even if they live on the 5th floor.

A solo project really depends on what you can do. For example, if you can draw, compose music, write that would be a great thing. but most of us common mortals can’t do that. In that case, free resources really save you. it might not turn out very original with free assets, since you can easily see other people using them too, but that’s still enough to bring out what you want to make

I did a solo project with free resources. I gotta say it didn’t turn out bad. but eventually gave up because of the lag (abused of the engine yet again lol i mean, since it’s my solo project, there’s nobody who would cry if I ruin the thing so isn’t it the perfect chance to mess up?).

This is a personal preference, but do you think about the game endings before you make it? Or work as you go?

Depends. Having an idea of where it’s going is useful. I also saw many writers who suggested writing the ending first, because that would be the most important part of your work and the last impression of your game.

However, from my experience, that’s also pretty hard. Let’s say you have a beginning and one ending. What then? What do you put in the middle? You’d have to make sure the beginning and ending are actually connected. Personally this made me rewrite the middle parts so many times that you can’t even imagine (still rewriting fluffland over and over sob).

I guess it depends on the CloudNovelist themselves. I heard many people find it easier to think as they write, because they can go with the flow and don’t need to force the story to bend in the way you established in the beginning. I personally do both. I think of an ending before writing, then change it.

Yes, I love making plans and then not following them. isn’t it great? If you read version 1 of my game and then the official version… they are probably two different things.

Thanks! I really appreciate you giving a realistic solid advice and having the courage to say how collab is hard

You’re welcome. i’ve cried on it. it’s harder than finding a boyfriend, i tell you.

You know that moment when you start a relationship and then they dump you and ghost you. Well, same thing. #MyProjectLeadersGhostedMe

Rip. Good thing you have Goat (monoyagi) though! Are the two of you participating in summer jam?

Nope, still stuck on fluffland. I decided to not work on anything else before I finish fluffland. because that’s really a lot of work. I think I decided to put too much stuff in it back then and lowkey regret XD

Thank you so much! And good luck with Fluffland, we look forward to it!