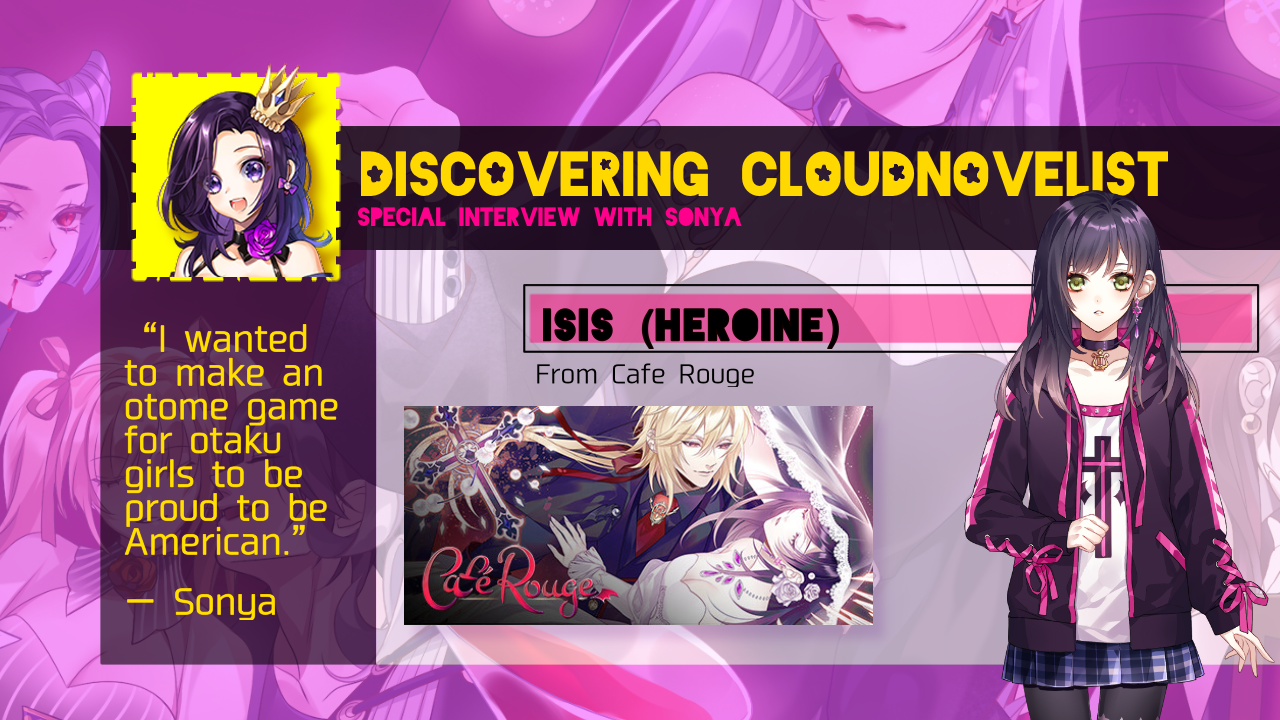 Hello fellow CloudNovelists! With the summer jam started and Cafe Rouge to be released in just a few days, this month’s Discovering Cloudnovelist is a special issue with our own creator, Sonya Fung!

Sonya is the founder and CEO of CloudNovel. But before that, she was also a visual novel developer, using various mediums such as Flash and code to gain quite a following. Soon, to help bring visual novels and storytelling to the rest of the world, she created the CloudNovel game development engine. Now, with the engine development complete, she is using her own engine to remake one of her games, Cafe Rouge.

In this interview with Sonya, our creator discusses the thought process behind her game, as well as tips to readers who are curious to play it!

Thank you Sonya! It’s such an honor to be able to interview you about Cafe Rouge.

Cafe Rouge was one of the debut games that you’ve created, and its content also helped draw people to CloudNovel later on, including myself. Can you tell us a little about the history of Cafe Rouge?

Yeah, the original 2012 game was written by me as a 16 year old with little relationship experience other than novels. In this 2020 version, it’s a more realistic story on romantic relationships. I rewrote a lot of it after having been in a few relationships, and matured a little as a writer and game developer, adding in more deeper elements as well. This game is designed for the coming of age teenage girl reaching adulthood, but considering how much effort we put into making this story, I’d say anyone thirsting for a romantic novel and story would enjoy this game.

There are so many characters in Cafe Rouge (and the art for all of them are gorgeous!). What ideas inspired their designs?

Antoine: When I told the artist who was designing the characters, she wanted to give him dark brown hair and green eyes and a green outfit. In the end, we agreed on platinum blonde hair, calling back to the “prince charming” aura in the more classical games and media. Another reason is that he is the catholic boy country type from old money south, and most people from there usually have blonde hair. So we chose to have the shiny blonde hair due to his background.

Isis: Isis was the other character that had to have green eyes and black hair. In the original 2012 game she had green hair. However, we changed it in this remake because well green hair is less natural, and we wanted to appeal to more otaku fans, thus picking more natural hair colors. I wanted Isis to have black hair because I’m asian and I have black hair.

For the rest of the characters, I gave the artist KUMA free reign to redesign. Antoine and Isis were the only characters that had to have specific hair and eye colors, because they are the true ending and the true romance route to the whole game.

Much of the major changes to the visual novel are spoilers, so I won’t go into them. You can play the game to find out. Overall, one particular change was made to fix all the plot holes in the old version of Cafe Rouge, and also made way for a sequel if we can sell the game successfully on Steam.

I also inserted a lot of American culture into this game. The two vampire covens, the Blue blood vampires versus the Red blood vampires, stemmed from a reflection of our own political parties in the American government. The whole Democrat versus Republican, Liberals versus Conservatives was evident in my own personal experiences and also inspired some of the deeper elements of this story. I made the Blue blood and the Red blood vampires reflect the two different American cultures we have in our country, showing people how irrational it is that we hated each other just because of different morals and beliefs.

What inspired you to create the backdrop of a vampire cafe story?

Sure, the idea of a cafe. . .  I went to Boston University for my undergrad, and there are many small businesses in the Boston area. In particular, I loved going to the cupcake bakery shops in the city on the weekends when I was an undergrad student. Back then, I was a total twihard Twilight fan girl, and I loved Edward Cullen in high school, so I wanted to write my own vampire story. With the cute cafes in the city in my undergrad experience, and as the typical vampire loving teenager for most girls growing up in the 2000’s, I decided to make an otome game in Flash based on those two things.

Another reason was that a lot of white/caucasian girl classmates who were also otakus, would not stop talking about moving to Japan because they loved anime and loved japanese culture, I wanted them to be proud of being American because so many Asians from Japan, Korea, and China all want to move to USA. . . Even though I was an otaku, I was pretty proud to grow up in the USA, and I wanted to make an otome game for the otaku girls to be proud to be American.

Wow, that’s a really inspiring cause! Moreover, this issue is not only prevalent in the US, but many other countries as well.

Yeah, I think we should all be proud of our home country, because they also play a role in who we are.

I wholeheartedly agree. It sounds like there was a lot of history and thought into Cafe Rouge, and really there is. How long did the 2020 Cafe Rouge take for development?

The game’s also made with the CloudNovel engine you made too right?

Compared to your previous experiences with making the game in Flash, how was making it on CloudNovel?

Oh god, it was so much easier. Flash was designed with the scripting language Action Script, which was intended for making any kind of 2d game. CloudNovel is designed for making visual novel games, and there is no coding.

I’m glad that I took 5 years off from game development to build this engine, because it probably sped up development time for making the 2020 remake of Cafe Rouge at least 10 times faster and easier to develop and build. We designed CloudNovel just for making these types of games like Cafe Rouge, so it was extremely easier and faster.

That’s amazing! Win win situation. And there are also a fanbase of people who are able to access the game online as well B)

Yes! The online browser based game will be free within game purchases. The original game will be free to play in full, and if you want to save checkpoints within the game, it will cost just 100 cloud points you can buy at the CloudNovel store. But if you want to play the game without in game purchases like saving, you can purchase the Steam version for just $20 and you can save the game however many times you want.

Ayy, both are quite great options. Aside from deciding to play offline or online, there’s also another important decision to make. With so many routes in the Cafe Rouge game, each with their own mysteries and storylines, many of us are wondering where to start! What order do you recommend readers to play in?

Well, if the player plans on playing all 3 routes, I suggest the order to go with is Valen’s route, then Ron’s route, and lastly Antoine’s route.

Gotcha. How about personal favorites out of these love interests. Any preferences~ ;D

Well the cafe rouge story is based off of Antoine’s past story with the mysterious woman in his past, Lizzy, so he is my favorite. But my favorite character besides the ikemen love interest males is Candice.

She is! Candice’s story is what people in the original fanbase called a heartbreaking tragic story, and her past story is probably the most well written in the entire game. Both Antoine and Candice have the most tragic backstory, and they both happened to be blonde haha. In my opinion, Candice’s story may even be better than Antoine’s back story.

Wow, this is exciting. We can’t wait to find out all these parts by playing the game! Where can we find it?

The game will come out on July 1st. Here are the links for CloudNovel and Steam.

Look forward to it. Thank you so much for your time for this interview!

No problem! Have a good weekend.